Racquel Palmese is a much-loved spiritual mentor, counselor, and transformational guide who has dedicated her life to supporting others in unblocking from whatever is keeping them from their full expression in their spirituality and life. Through her individual sessions, couples work, and her Circles Of Light workshops and retreats, Racquel holds a deep, solid, fully present, loving and fiercely aware space for those she works with.  This allows them to face, embrace and transmute that which is locked inside and calling to be liberated and transformed.

Described as “a conduit to the presence of Spirit,” Racquel is honored to work with many of today’s bright visionary leaders, serving as a mentor, confidante and ally for those who often support and inspire hundreds of others in their public work and efforts as changemakers and ‘lamp lifters.’ Her personal journey of awakening, healing and stepping into her calling was a long, winding, and sometimes deeply humbling road of self-discovery. The essence of radiance, care, love, and excitement for life that emanates from her is a compelling reflection of someone who has traversed down to the bottom of the muddy lotus pond, and has emerged at the surface with the gems of a courageous life journey well lived.

Like so many of the people she sees in her circles and private practice, Racquel’s early years were filled with the challenging and often confusing initiation of finding a place and expression for her Soul’s gifts. There was no context for, or way to integrate the knowledge she had of places and spaces beyond this third dimensional world and lifetime, and the large energy streams that come through her. The tension of all of what was wanting to be expressed through her, contrasted by the conventional societal structures and cultural norms of the time, created a very unsettling state of continual unwavering fear within her system for the first half-century of her life. She often jokingly refers to herself as a ‘late bloomer.’

Moving from the East Coast to California and discovering the Human Potential Movement in her twenties opened a whole new world which felt expansive and resonant to her. The life-changing event of Racquel’s beloved daughter Justine’s birth also served as one of the most gracious and heart-expanding catalysts on her journey of growth and evolution. There was, and is, an ineffable bond between the two in which Justine, even as a very young child, was able to transmit a continual stream of important and transformative teachings to her mother, in just the right moments.
​
However, with unprocessed trauma from childhood still needing resolution, and an overall dissonance with not knowing how to share and express the gifts, wisdom and information that her Soul brought to share in this dynamic world, Racquel fell into patterns of escape that lasted more than a decade. In hindsight, she sees this as her time of greatest learning. In her most challenging hours, Racquel felt as if Spirit was asking her: “Are you willing to stay here or not? And if so, then who will you need to become?” Not long after that, she met her spiritual teacher, Charles McCall and the answers to those questions began to reveal themselves powerfully. 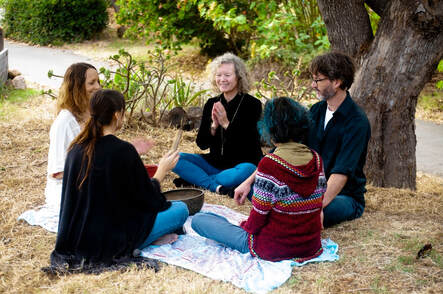 Racquel working with her clients.